On a little offtopic today, I’d like to mention this tunneling service I’ve been using since last summer.

When Gameforge took over the NC Aion service in Europe, me and most players experienced a pretty big increase in ping/latency, making the game a painful experience often rather than the fun it used to be. Ping went up as high as 250-300ms with often even higher spikes and very unstable. I had been hearing about “battleping” for years but I was a bit reluctant about it, since I thought… well my ping is what it is, can’t really make it better unless a new ISP moves in etc.. but then I gave it a try after a few months and omg was I surprised. Note that this is different from “Leatrix” and similar software (ARM has the same feature), as those are simply a setting change in the Windows’ registry which in some cases does not help that much (still recommended you use it though in all cases); Battleping instead is an online service that connects you to the game through their servers.

With this service my ping goes down to 80..90 ~averaging 100-120 at most, maybe peaking 150 at busy sieges. The difference is extreme, no more spikes, and even though it’s still worlds apart from those on 30-40ms.. everything feels a lot more responsive, my dps ramped up, it was easier to kite/chase in pvp, faster dispelling etc.. it’s like a whole different game, to the point I couldn’t imagine playing Aion anymore if I couldn’t use this service. Whenever I forget to start the program, I immediately feel something’s wrong and the game is more laggy than usual, it’s an extreme change.

So if you are having ping issues, I recommend you give Battleping a try. Check the ping with the different servers to see which works best for you. In my case it’s France or UK, even though they recommend using the one closest to the game server, these 2 work better for me. If you want to play in US servers from Europe, the “East Coast 1” gave the best results for me, bringing ping from 400-500ms to a somewhat bearable 150-250, or else try the ones in Texas, as that’s where NC has their servers. 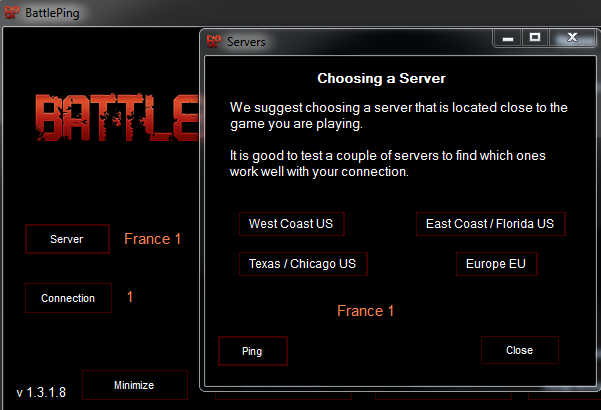 To get it working you have to follow these simple steps:

This works perfectly also launching Aion from ARM, you should see a message in green on the window that says “Game detected” after the game is running. In the case of Windows 8, you probably won’t see the message until you reach the login screen.

This is their website where you can give the program a try, it will work for 20 minutes without even needing an account so you can check it out:

Note: there was some debate lately in the Gameforge forums as to whether using BP was allowed or not, because there were some recent bans stemming from its use, but in the most recent announcement they said it will be tolerated and they will not be banning anyone for using this service. The Battleping staff were in contact with GF to sort this out in the last few days.

Battleping and such software
Technically the use 3rd party tools is regulated in our AGBs. Battleping qualifies as a tool that may not be used, based on the AGB. However, as with editing your client, we currently do NOT ban accounts for using the BattlePing tool.

we currently do not have any specific plans to ban the use of BattlePing in the future.