It’s been barely 10 months since I published the very first version of ARM, ~7-8 since the first usable version with dps etc, and about a year since I started this project. Last few days we reached 25.000 downloads, and ~400 of the cfg edit tool, must say I didn’t expect the software to become so popular, mostly in the last few months.

I was checking the first few versions.. and omg, it was so ugly -.- I’m more of a code guy so I’m not really very good at designing friendly and good looking UIs, but I’ve tried my best build after build to make it more usable and easier to use for first timers and after new features, trying to think every possible scenario after an install and possible issues with setting up the chat.log etc.

First beta version I published, just as a test/announcement of the development 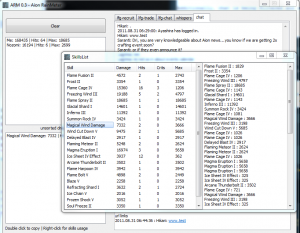 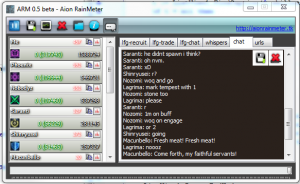 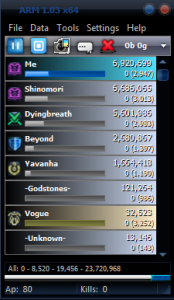 Some users probably don’t use most of the extra features it offers, and I understand it might be a little confusing or complicated understanding what everything’s for, though I’ve tried to keep the basic functionality simple and ready without any extra configuration. I am always welcoming feedback, so be sure to contact me anytime with your ideas or thoughts. I have received tons of feedback from users, here in the comments, through the contact form, in-game, on boards, thank you everyone who one way or another contributed to making this little app so successful :)